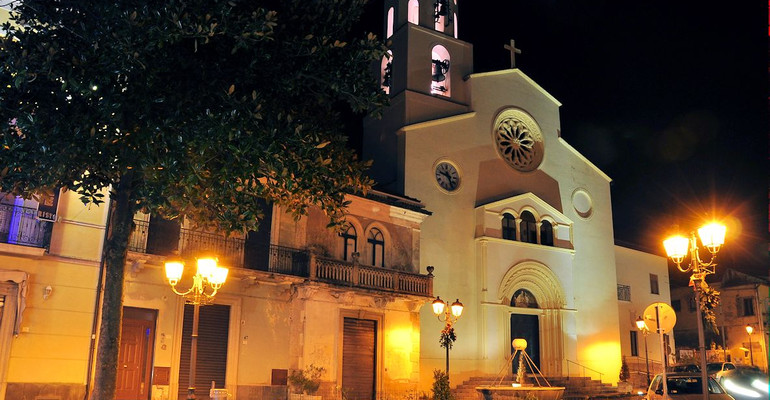 The church dedicated to St. Matthew the Apostle , in addition to being an important historical and architectural emergency Agerola is , with its elegant facade, the prominent element of the central square of Bomerano . The earliest records date back to 1158 , that reported in the south- west of the ancient town of Bomerano , one of the four houses which resulted in Agerola divided in medieval times. Destroyed , it was rebuilt in 1580 in Piazza Paolo Capasso .

The church preserves precious sixteenth-century origin . Date from the second half of the sixteenth century marble baptismal font and the inscription , placed outside , commemorating the construction of the parsonage . Of great grandeur is the eighteenth-century wooden ceiling in which it is the large painting of the Martyrdom of s. Matthew, solimenesco work of Paul de Majo , dating back to 1745. Scoop On the main altar of the Madonna in Glory with Saints Matthew and Andre , dating back to 1610 and comes from the renowned workshop of mannerism southern Giovan Angelo and Giovanni Antonio D ' beloved. To the left of the altar is the seventeenth-century canvas painted by the painter of Sicilian origin Michele Ragoglia that depicted the Madonna of the Rosary. But the artistic heritage of the church boasts the Crucifix, fifteenth-century masterpiece , a work that is influenced by the style of the masters training Flemish -Burgundian Peter and John Alamanno . Dated between the years 1785 and 1790 the construction of the wooden sculpture depicting St. Joseph and Child, attributed to a follower of the master sculptor Giuseppe Sammartino .