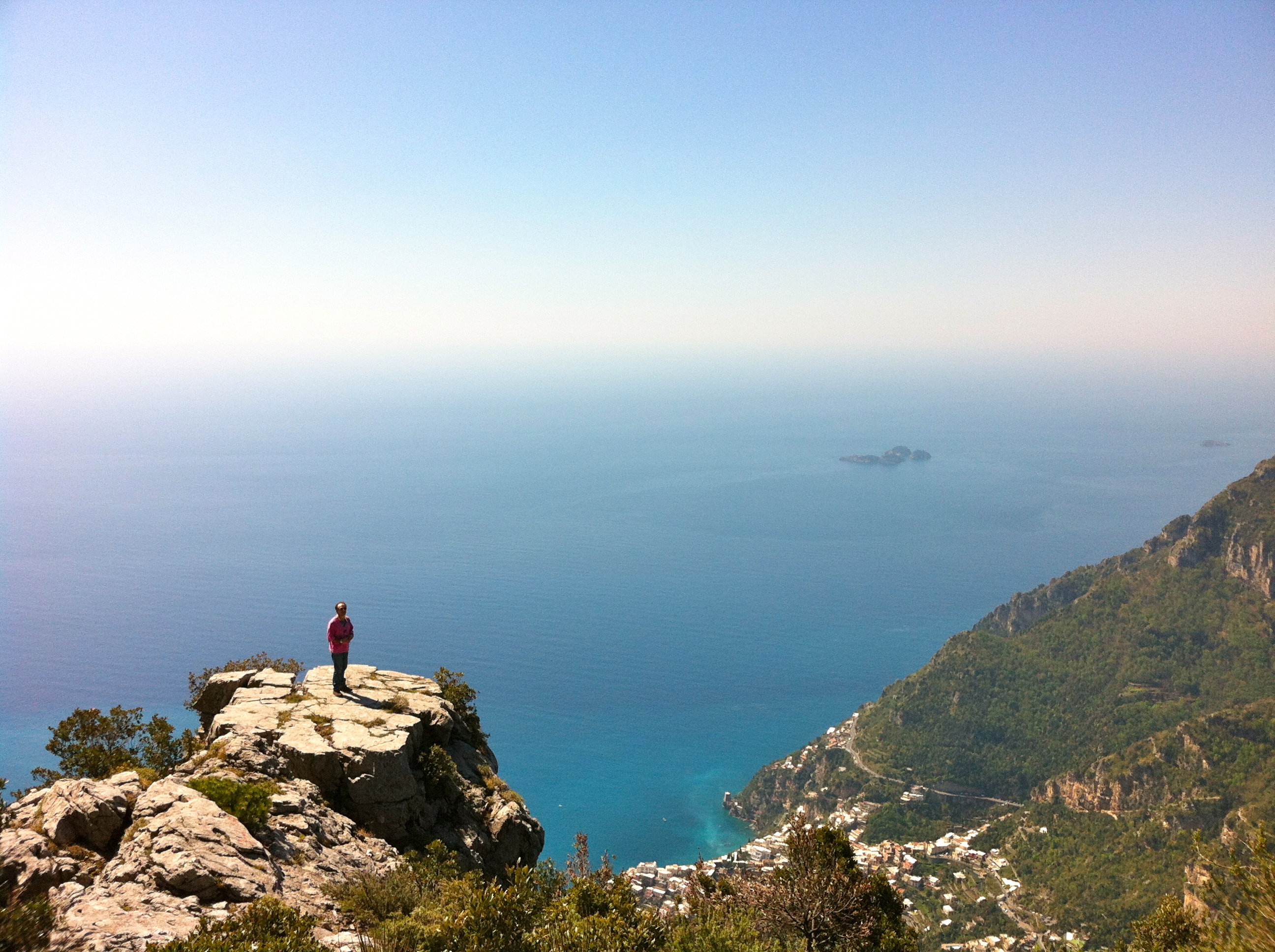 A path of outstanding natural beauty that dominates the coast between Praiano and Positano, running parallel to Path 2, at altitudes of about 850 to 650 m. Along the path you will observe the impressive remains of a large landslide, the jagged peaks of Mt. Tre Pizzi, and fascinating changes in the vegetation.

Path information
Upon arrival at Paipo Casino, by car or by foot, you walk about 400 m uphill along an unpaved road. Then you enter on the left, a mule trail that lightly descends, recognizable by red markings painted onto tree trunks. Further on, where the path narrows, follow the same red markings painted onto rocks. You face an uphill stretch for 200 m, which leads to a more obvious mule trail that goes down to the riverbed of Gradelle Vallone, arriving at a signed junction. Follow the path up the hill along the opposite side and after a very challenging climb, continue upward for about 700 m. At the junction that you encounter shortly after passing a few descending steps, you enter a rapid set of steps uphill, that take you to the gorge of Vallone Porto. Here you cross an accumulation from a recent landslide, following the red signs marked upon the massive boulders. Upon reaching the opposite side of the valley, you will enter a path going downhill along a fence. After passing an area covered with Cypress trees, you come to a junction where you must turn left to descend to the Forest Rangers' Barracks (Caserma della Forestale). From the square opposite the barracks, you enter an inclined path which crosses other woodland areas, leading, after about 1.5 Km, to the higher ground of Santa Maria del Castello.
From here, if you wish, you can descend to Positano via the demanding steps of 'Le Tese', and return to Agerola using the SITA bus service. Alternatively, from the Forest Rangers' Barracks, take the path that leads to Montepertuso and hike up towards the Vallone Porto. It then joins with the Path of the Gods, and then it's back to Agerola following the latter.
There is also the possibility of an alternative path from the Forest Rangers' Barracks, which climbs to the Cross of Conocchia (1377 m) (CAI Path 300).

Valuable information and points of interest
The principle values of this trip, besides the 'sport', are those related to the views and landscapes.
As for panoramas, you can read what is described for Path 1, that in fact, follows almost parallel with the path under examination here. Due to the high elevations of this path, it makes for even more sweeping views of the coast between Vettica Maggiore and Positano, and from here up to the Punta della Campanella and the island of Capri. The Gulf of Salerno dominates the south, with the little islands of Li Gallli almost under our feet, and the horizon hidden by the headland of Cilento.
Moreover, once at St. Maria del Castello, the view also opens towards the north revealing the entire Gulf of Naples with its islands, the hills of Flegree and Vesuvius.
In addition to these long distance views, the route also lets you to enjoy beautiful outlooks over steep, tectonic slopes, the mountains of which we are crossing 'fall onto the sea'. From Campo Di Galli, looking northwest you see geomorphologic elements to which Montepertuso (pieced mountain) below, owes its name: a sharp spur of limestone that is pierced by a large cave.
However, looking upwards you can admire the rocky cliffs and towers of early Cretaceous limestone, which culminate with the various peaks of Mt. Sant'Angelo a Tre Pizzi. From the most eastern of them, Mt. Catello, some years ago there was an immense landslide of which we can still see the scar.
Crossing the higher grounds of Vallone Porto, you also pass a pile of large and small rocks that accumulated as a consequence of this exceptional landslide. Going towards the mouth of the valley, it narrows, becoming a spectacular gorge with vertical sidewalls of high ecological value, which ends on the beautiful secluded little beach of Arienzo.
In so far as the vegetation that you encounter along the path, we draw your attention to the Chestnut trees on the initial portion, the mixed woodlands that appear in the intermediate part of the path, and the reforestation of Pines and Cypress trees in the final stretch.