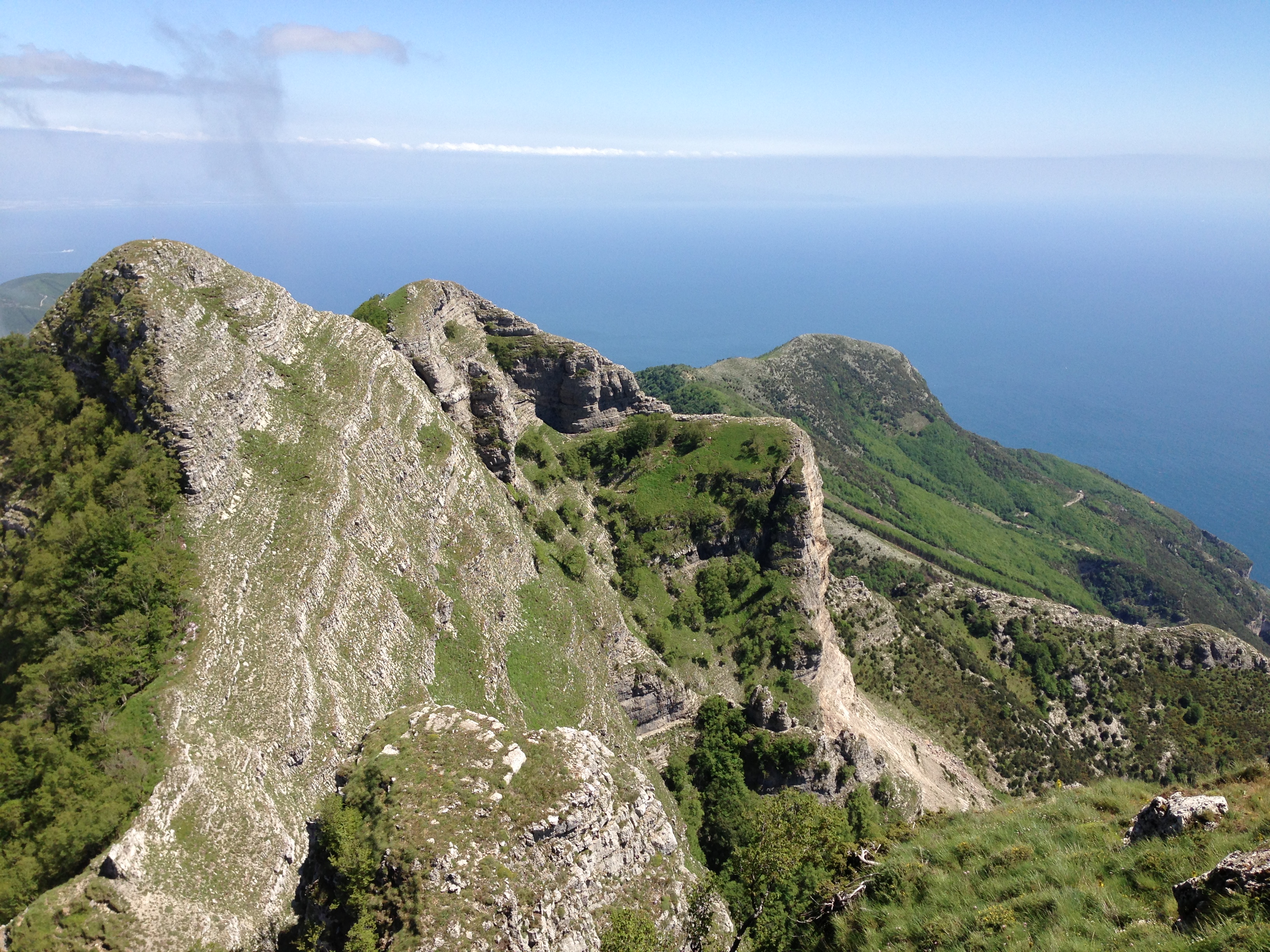 Easier than the previous but for experienced hikers, this climb leads to the highest altitude in the Province (1444 m) and its spectacular 360 degree view of Campania, following a journey rich in geological, botanical and historical value.

Path information
The path starts at via Locoli, a little before the abattoir where there is a small yard with a trellis.
Here you enter a steep path to the right, passing houses and a succession of stables and terraces.
Continue climbing along the mule track that within 1 Km, takes you onto a watershed between Agerola and Pimonte, in the area of Crocelle (about 1002 m). Here you turn left, following for about 700 m, a path between Chestnut trees.
In the proximity of a small junction delineated by a big rock with a red marking, you turn right. You now follow the path north to Mt. Sant'Angelo a Tre Pizzi, along the 'Malo Passo', always keeping to the left and ignoring the little deviations that descend from the principle mule track. After about 1 Km, passing a stretch fitted with wooden handrails, the path becomes less evident on the rocky surfaces; you follow the markings posted first on tree trunks and then on the rocks.
After a short climb, you will reach a wider path. A further 200 m will bring you to a junction where you turn uphill to the left, under large beech trees. Pass the cave where the source of the Acqua Santa spring flows, and continue over a zigzag of rocky steps until you reach a junction to the right which leads to the Cross of Conocchia (the panoramic western spur of the Tre Pizzi, to which you can make a small deviation). Without deviating at the junction, in just a few minutes you will reach a characteristic passage between the rock spires, which mark the dividing line between the north and south sides of the massif. Keeping to the left and you reach the base of the 'Molare' (alias Mt. St. Michael, the highest peak of the massif), the top of which you can reach via a set of steep , rocky steps.

Valuable information and points of interest
The initial part of the path crosses Chestnut groves and mixed deciduous woodland, while behind you is the beautiful panorama over Conca di Agerola. Arriving over the watershed where it is possible to come across wild flowering carnations, the panorama also opens towards the north to reveal the Conca di Pimonte, the Plain of Sarno and the unmistakable silhouette of Vesuvius. The piece of trail that goes up along the northern side of the Tre Pizzi, passes over marine limestone of the Cretaceous period, and reveals very contrasting vegetation when compared to the south side. Instead of Oak, the Beech dominates here, some of which are centuries old.
The cave of Acqua Santa has attached to it a legend dating back to the early Middle Ages, which tells that the devil had settled here but was driven out by the Archangel St. Michael. With three long jumps the devil leapt over the mountains and threw himself into the Gulf of Salerno while the Archangel, as a reminder of that victory, pierced the rock with his sword and created the source of the spring.
In the V11 century, these peaks saw the hermitages of St. Antonino (now the patron saint of Sorrento), and of St. Catello (now patron saint of Cast.mare. of Stabiae).
Just on the top of the Molar, they built a little temple dedicated to St. Michael, which was destroyed by the ravages of centuries and rebuilt in the year 900 on a peak between here and Mt. Faito.
The highlight of the excursion are the splendid panoramas that you can enjoy from the achieved peak. Below to the south we have Positano with its gulf and the little islands of Li Galli. Westward is all of the Sorrento Peninsula and the island of Capri. To the north all of the Gulf of Naples with its islands and Vesuvius, then on towards the east ending with the other peaks of the Lattari Mountains. If the air is clear the panorama is more broad and embraces the mountains of Gaeta, Formia, on to the southern part of Cilento (Mt. Bulgheria), through to the azurish silhouettes of Matese, of Taburno, Camposauro, the mountains of Nola, Avella and Sarno, Mt. Picentini and the massif of Alburni and Cervati.