FROM TUORO TO BOMERANO ALONG THE SCHIATO AND PRAIA GORGES 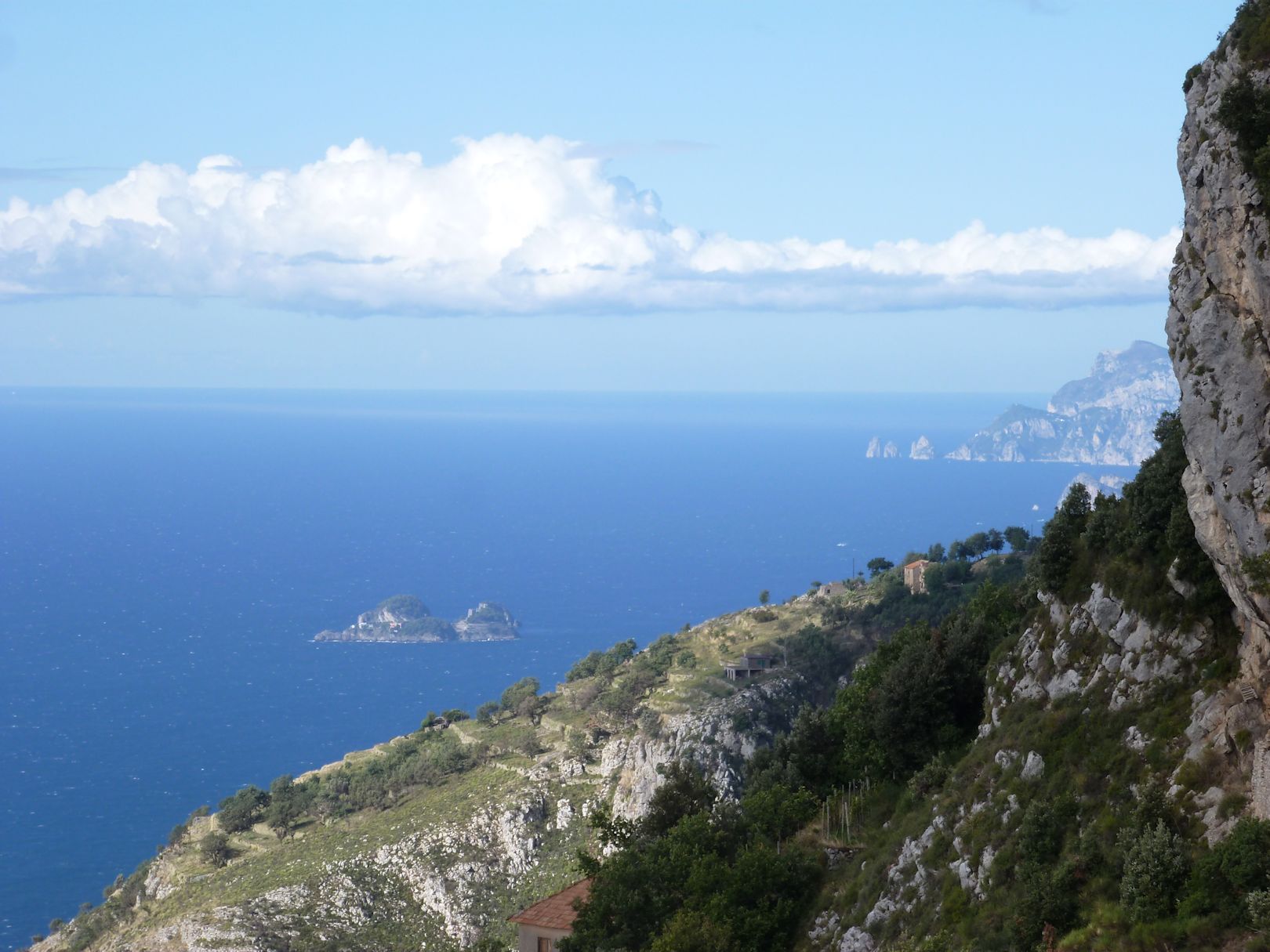 A characteristic route of both historical and geological significance which allows you to move from St. Lazzaro in Bomerano and vice versa, following the base of the beautiful pink cliffs that fringe the uplands of Agerola. Continuing in the gorge of the of Schiato and of the Praia stream, you also can admire examples of Mediterranean vegetation, terraced vineyards and ancient rock houses.

When you reach the area of Tuoro (the southwest outskirts of St. Lazzaro), take the paved side street that winds down the side of the canyon of Penise-Schiato. At the end of the paving you continue straight with the comfortable path (also known as Path Abu Tabela), that follows the base of the rock wall. After about 700 m you come to the bottom of the gorge and at the proximity of ruins of an ancient mill. There, you leap across the narrow, rocky river bed. Having past onto the other side, you will walk up until you reach the first homes of Furore (in the area of Pino). Here the path becomes a paved road that is followed until it reaches the main road that descends from Agerola to Amalfi. Deviating from it to the left, you will follow it for about 800 m, and just before the next bend, bare to the right onto via Le Marelle. At the end (about 300 m), you will pass under the rock walls of Pizzo Corvo. The street ends with a square from which you take a small ramp of steps to the right. It leads to a mule track of alternating level and uphill stretches, taking you back up to Bomerano along the east side of Vallone Praia. Continue walking at the base of the high cliffs that drop from Punta Corona, from which you follow a long series of uphill steps, at times full of holes. You come to a shrine (with tiles depicting St. Barbara and the Madonna of Pompeii), beyond which the path is evident and well arranged (Path Pennino). Following it up, ignoring the deviations that present themselves to the left. After about 500 m you come to via Pennino and thus, piazza Bomerano.

For the return to St. Lazzaro, you can use the SITA bus service.

Valuable information ​​and points of interest

The rocky walls looming over the entire path are made of rocks belonging to the Cretaceous, tectonic overthrust. Right where the overlapping strata occur, which were created from the tectonic movement, the proceeding path traverses it just before arriving at the shores of Penise and Schiato. Also interesting is bush and scrubland vegetation that you pass in the stretch from La Marelle to St. Barbara, with Carob, Mastic, Strawberry Trees, Rosemary, Myrtle and Cistus. The woodland stretches show a prevalence of Woodland Oak, Oak and flowering Ash. Another interesting aspect is given from the rock homes that exploit the little caves at the base of the cliff. You will encounter them on the stretch between Tuoro and Schiato, and in the area under Pizzo Corvo. This last toponym refers to the nesting place of the Imperial Raven, one of the large birds that you might see flying around during this long excursion . At the entrance of the higher cave of St. Barbara you have the ruins of a small church from between the X-XI century. Moreover, in the lower cave you have the ruins of a small oratory. Probably they are buildings that were constructed by a community of hermit monks that lived alone in the various little caves of the valley. Attention! The climb to the above caves with the ruins, is recommended only for expert climbers. Very accessible however, is the small Grotta della Serpa (or Grotta dei Drappi), located on the path shortly below the shrine. On its walls you can admire the beautiful draping stalactites of pink calcite. Completing the value of the route are the panoramic glimpses over the coast, its suburbs and bays that can be seen from various points along the path.