FROM BOMERANO TO M. TRE CALLI AND TO CAPO MURO 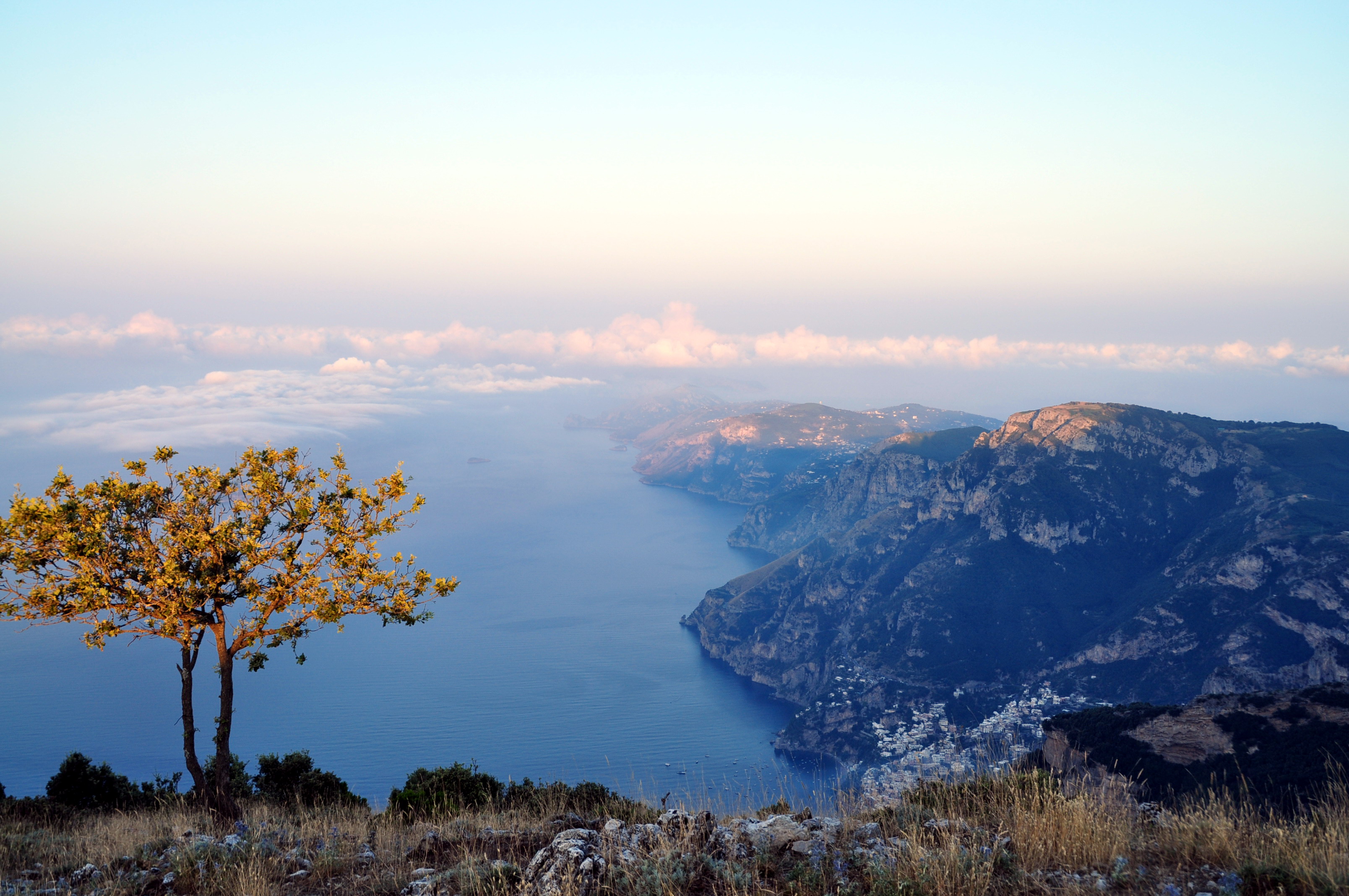 This pleasant ''climb' to the group of Mt. Tre Calli is part of a circuit leading back to the starting point. The path requires, especially in the first part, a good deal of physical effort which is amply repaid when reaching the summit, with an enchanting 360 degree view overlooking the Gulf of Salerno, Sorrento, Capri, the Conca di Agerola and of the other peaks in the Mt. Lattari chain.

Path information
From Piazza Paolo Capasso in Bomerano, take Tommaso Mannini street. After about 300 m, at a crossroads, turn 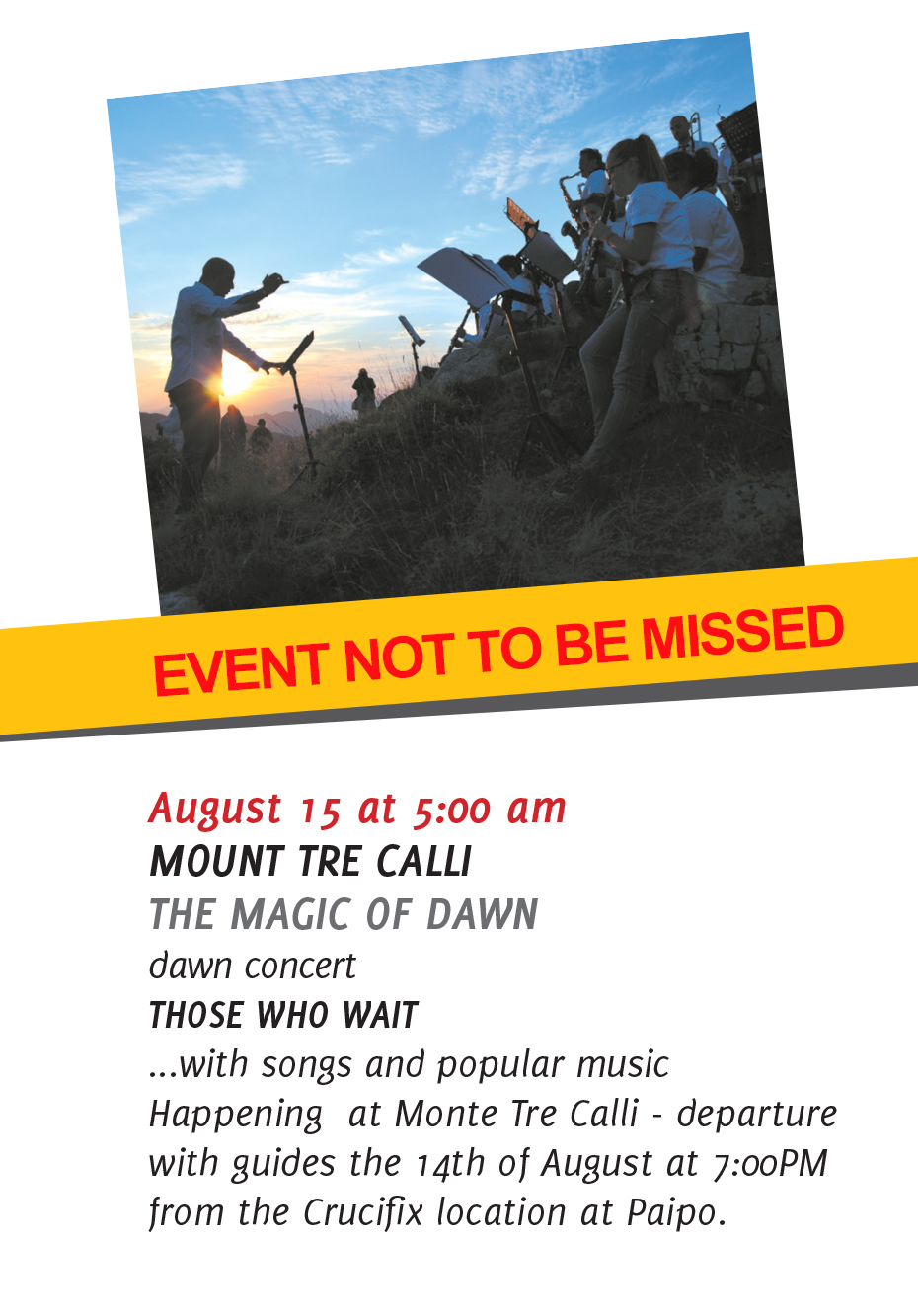 left. At 200 m, just after a left bend, take the steps leading up between the houses and cultivated terraces, through the hamlet of Pendola. You will eventually reach a road that climbs to Paipo. Follow it to the left and after 2 turns you will reach a crucifix. Here, take the trail on the right. After about 1 km uphill on a cemented path and briefly along a hilly stretch, upon reaching a little house/pen, the trail becomes less obvious and continues through vegetation. This section of the path is made up of rock, tree trunks and wooden steps, sometimes slightly rough. Once on the ridge, follow it left to the top of the southern most peak of Tre Calli (1122 m). Enjoy the beautiful views overlooking the coast, then retrace your steps passing the point of arrival at the ridge. Head north along the clearly visible path to the summit. Cross Mt. Calavrice (1145 m) heading down to reach the saddle of Capo Muro (1072 m), above which, rises the pyramidal mass of Mt. Sant'Angelo a Tre Pizzi. From here you can take Path 4 and climb the middle peak.
For the return, as well as the way you came, you can descend to Paipo Casino, taking the path visible on the left of the unmistakable 'mushroom rock' of Capo Muro, in a southerly direction. The rapid descent over rocks and scree, takes you to a dirt road that you must follow to the left. Once you reach Paipo Casino, continue along the same road (from here on it is paved) which you have traveled before in the first leg, until you reach the steps of Pendola again, and thus the Piazza Capasso.

Valuable information and points of interest
The principal value of this path lies in its great panoramic views. During the initial climb to Mt. Tre Calli, the eye sweeps over the entire agerolese basin, the eastern part of the Amalfi Coast, including its mountains, and the Gulf of Salerno with the silhouettes of Mt. Picentini, Alburni and Cilento beyond the sea.
At the top the landscape suddenly opens to reveal a fantastic panorama, a new view of Positano and its blue bay. Including the small archipelago of Li Galli (or Sirenuse), all of the Sorrento Peninsula with its southern side that runs to the sea with spectacular cliffs. Also visible is the island of Capri with its stacks. Naples is covered by the mass of the Tre Pizzii but behind the hills of Vico Equense, appears Ischia, lost in the waters of the Neapolitan gulf.
Looking out over the top-most southerly peak of Mt. Tre Calli (1122 m), high above the verdant Praia Valley, is the promontory of Praiano and Vettica Maggiore. Approaching Capo Muro you face the southern edge of the bare and layered Mt. Catello, which almost looks like an Egyptian pyramid. Down at Paipo Casino, as well as the views of the coast, your gaze is drawn to the rocky walls and towers which culminate with the various peaks of Mt. Sant'Angelo a Tre Pizzi.
The rocks on which you walk are initially 'Pendola' and towards the end, 'Paipo', formed from slope debris cemented at the end of the Pliocene. Identical in nature are the rocks that you have seen (from afar) in the side of the field spur of Li Galli, above Nocella. Above the altitude from 800 to 850 m, you walk instead upon limestone and dolomite limestone of the upper Jurassic, because it was born out lagoons of blackish sludge, rich in decomposed organic remains.
In so far as the vegetation along the path, you encounter first of all, Chestnut coppice and mixed undergrowth of sumontane horizon , but the sunny exposed slopes to the south and southwest permit the rise of Holm Oak, not usually seen at these altitudes.