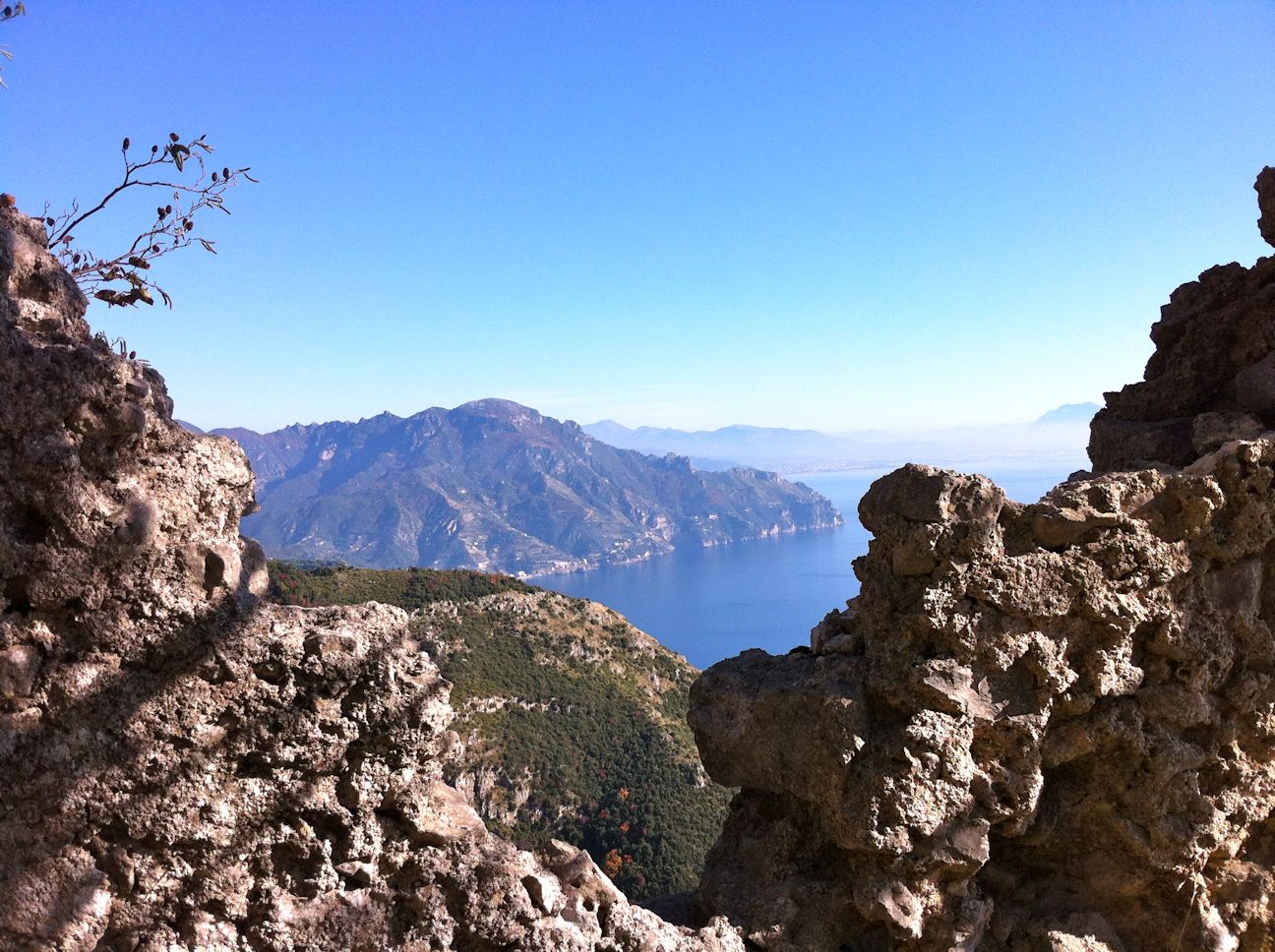 A moderately difficult path that goes over Mt. Murillo and takes you to conquer a fantastic view that falls sheer into Amalfi and its surrounding area. As well as the romantic ruins of a isolated medieval convent abandoned during the 19th century, that later became refuge to bandits after the unification of Italy.

Path information
From Piazza Avitabile then proceed towards Punta Belvedere, and after 100 m turn left onto via Radicosa, climbing the entire stretch. Continue beyond an obvious left curve and continue straight on the uphill road that enters the hamlet of St. Lucia. After the last homes, continue on up a long stretch of steps. Proceed along a flat passing through a Chestnut coppice, and after about a further 200 m at the century old Chestnut tree, turn right to enter a mule track that after about 300 m of light climbing, verges to the left and follows a rocky cliff (be careful!). At the top of a small and steep canyon you'll encounter a daring descent on rocky surface that leads to a grassy ledge which is a prelude to the ruins of the monastery (already visible from high above). The descent is not recommended to the inexperienced and those that suffer from vertigo, even if there is a handrail to help with balancing. From here the descent skirts the high, vertical rock wall, which is simple up to the plateau that is home to some ruins. For those wishing to avoid the following precarious stretch, we advise you to simply turn around and return the way you came. Should you choose to continue after having visited the ruins, you begin the return taking the path with the fence that goes up inland (northeast), passing along the foot of a rock wall. Where it disappears and you enter the path to the left that crosses over Chestnut groves, keep to the south side of Mt. Murillo and then descend to St. Lucia.

Valuable information and points of interest
Despite the relative brevity of the trail, this excursion towards the eastern border of the Agerolese territory, passes through diverse landscapes, discovering new panoramas and combining various points of value. After leaving the last homes, you will be on a mule track that in the Middle Ages lead you all the way to Amalfi, passing through Cospita and through Vettica Minore. When you have completed the ascent towards Mt. Murillo, admire towards the west, a panorama in which Conca di Agerola appears as if suspended over the coastline, while the island of Capri peeks from behind the mass of Mt. Tre Calli. Changing sides and beginning the descent, the landscape becomes distinctively more rocky and articulated.
The layers of limestone, locally deformed by the thrusts of Apennine orogeny , give rise to vertical walls and caves, and even a small spire which popular tradition recognizes as a Monk and where probably, the monks of the Monastery in which we are headed (St. Salvatore de Cospiti), carved the steps in the rock that help overcome the last differing levels.
The date of the foundation of the convent is unknown but is recorded in documents from the XII century, and it is said to have been visited by St. Francis of Assisi and Pope Sisto IV.
It was built on a flat ledge between the cliffs that descend from Mt. Murillo at the gorge of Nocito, in a scenario that definitely favors mysticism. Even the little cave that is mounted the on wall (partially reshaped by man), had to be a place of ascetic contemplation. Today even the most secular walker remains enchanted before the panorama that one enjoys here over Amalfi (that appears below to be very close), Ravello, the Demanio mountains, Capo d'Orso and the blue of the Gulf of Salerno.