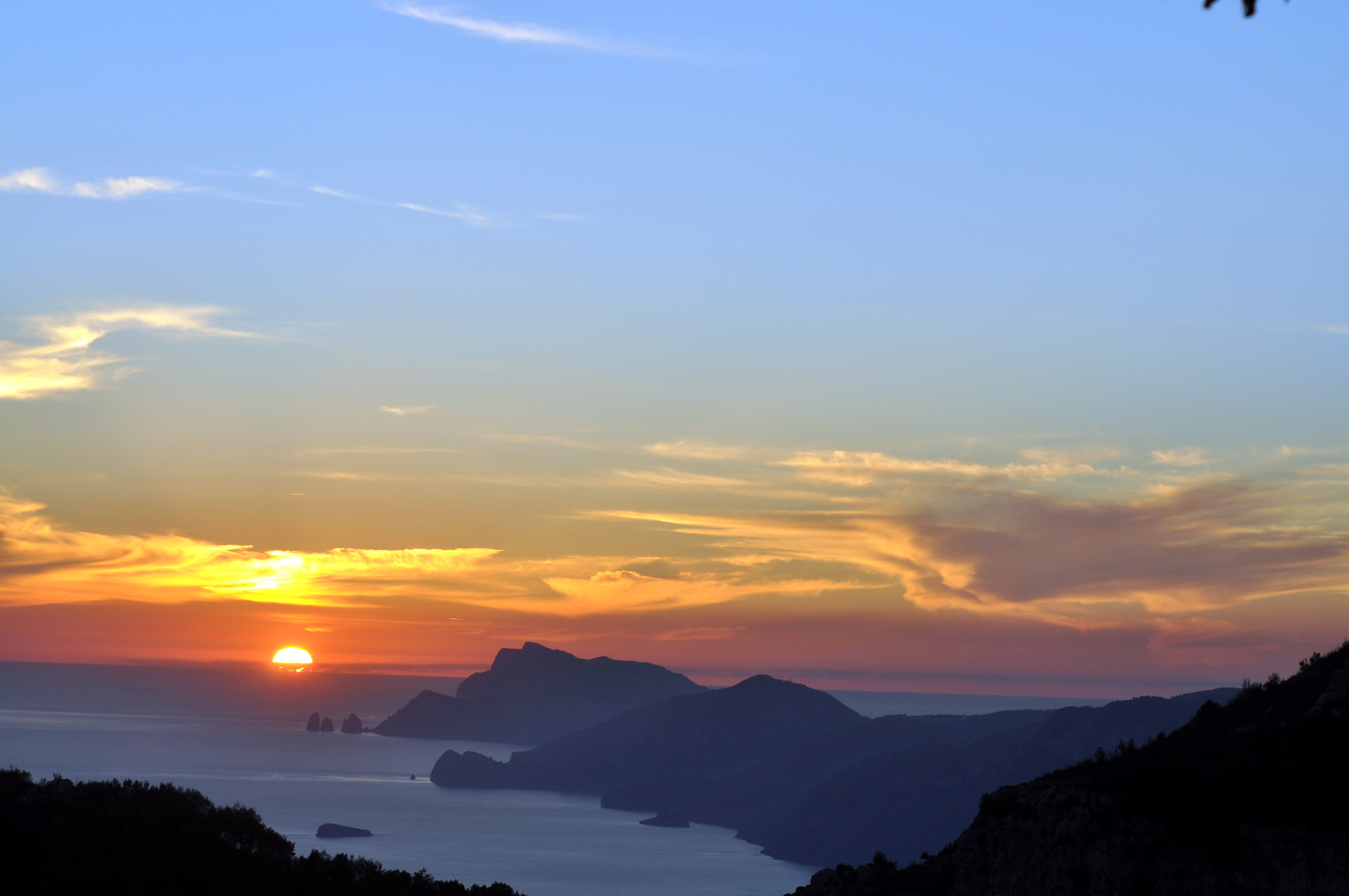 Known as the "Path of the Gods"' this path of international fame, is the most frequented in the area, following easy paths delineated by spectacular cliffs. Passing through various gorges, the path offers captivating views over Positano, the Sorrento Peninsula and small islands of Li Galli and Capri. Aspects of interest are the natural vegetation, cultivated terraces and old farm houses scattered along the path.

Path information
From Piazza Paolo Capasso in Bomerano, take the small, downhill road of via Pennino. After about 300 m, turn right next to the large steps, and pass over a wooden bridge. Climb the steps leading to a paved road which continues left until becoming a concrete covered mule track. Turn the corner, continue downhill and you reach the Grotta del Biscotto. Beyond the grotto the path becomes rough with mild undulations and will bring you to the pass of Colle la Serra (580 m).
When you reach a ruin, there are two different but equally scenic paths which rejoin later in the Cannati area (560 m). Turn right to take the higher, initially rough path which along the way, will reward you with visions of ancient lime factories from where once limestone was produced.
If you decide to turn left, which is recommended for those wishing to take a shorter route, walk downhill along the lower path. With its exposed sections, this detour leads onwards to the fascinating monastery of St. Domenico and then to Vettica Maggiore.
From Cannati, the lightly undulating path continues to wind along the coast through the Gradelle Valley until, after about 2 km, it reaches the hamlet of Nocella (420 m). On reaching the chapel depicting the Crucifixion and the fountain, turn right along a path that joins the main road and in 1 Km, leads to the hamlet of Montepertuso. Arriving here about 100 m after the square, you can enter the steps to the left that lead to the centre of Positano. Alternatively, from the piazza of Nocella you can go down the 1700 steps to Arienzo which is on the State Road 163. Follow it to the right (watch for traffic!), and after 500 m you will reach the centre of Positano.
To return to Agerola you can either take the SITA BUS to Amalfi, where you change buses, or in the summer months you can reach Amalfi by sea, using the Co-operativa San Andrea Metro del Mare ferry.

Valuable information and points of interest

The beautiful rocky wall of the Grotta del Biscotto is made of ancient cemented debris (final Pliocene), which fell from Mt. Tre Calli, and from a mountain to the south which is now gone, having been sunk by tectonics, into the emerging Gulf of Salerno. A little further on, the path begins to be made up of Jurassic marine limestone and dolomites; rocks that will continue to be seen along the rest of the way.
Near the Grotta del Biscotto, below the path, you can admire houses within the cave that perhaps began as hermit cells in the Middle Ages for those who lived close to the St. Barbara church (see Path 12).
100 m further on, there is the ruin of an old farmhouse boldly placed on the edge of a cliff. Other typical examples of rural architecture will be seen later in Colle Serra, Cannati and Nocella.
The presence of ancient man is manifested in the landscape with the well-planned agricultural terraces, supported by 'macerine' (dry walls). These terraces have not been abandoned, they are either home to pergola vineyards which produce a great 'extreme wine' or, at lower altitudes, to lemon groves which produce the famous Amalfi Sfusato, and from it the best local Limoncello.
In terms of vegetation, this path offers the opportunity to observe the transition from submontane woodlands on the horizon (the head of the Vallone Praia, especially on those slopes facing northeast), to the typically Mediterranean (ilex, garrigue and maquis) occupying the lower and/or the sunniest areas. Of all of the varied and spectacular spring blooms, we would like to point out the endemic Santolina, Myrtle, Rockrose (both white and pink), Broom and Rosemary.
The dominant values of the path are found in the amazing, articulating orography of a continuous succession of cliffs, pinnacles, ledges and canyons. Breathtaking, ever-changing views and vistas at every new ridge show us the entire cliff from Positano to Punta Campanella with Capri in the distance, including some unusual views from above the bays and headlands of this stretch of the famous Amalfi Coast.