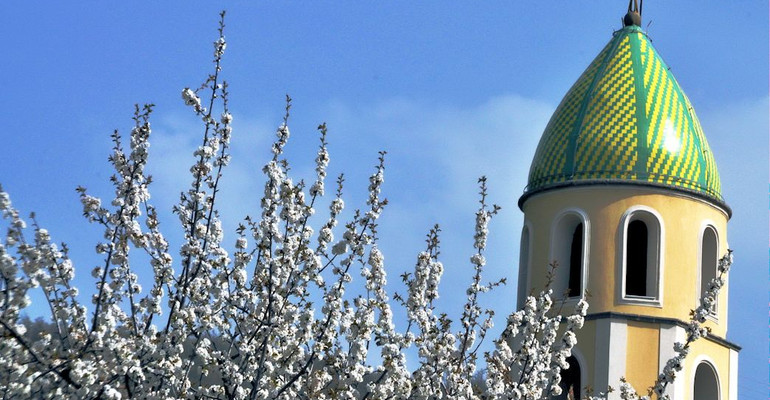 Built in the thirteenth century , over the years has been remodeled several times and having suffered considerable damage in the earthquake of 1980, remained closed for a long time . Subsequently, with the intervention of the Government, the Superintendence of Historical Heritage of Naples and the faithful of the village , the church was restored and reopened for worship on August 14, 1999 .

The artistic heritage enriched the interior was partially damaged and partly looted following the earthquake of 1980; among these must be recognized , however, the table of an unknown author , presumably made ​​in the sixteenth century, according to the artistic styles of the previous century , depicting the Virgin Mary with Jesus down from the Cross in his arms , flanked by St. John and St. Augustine bishop. The painting of little artistic value, placed on the altar at the bottom of the narrow aisle , bore witness to the ancient and important presence in the church of Monte della Pietà. The masterpiece kept in the temple is the marble sculpture of the Madonna della Manna , built in the thirteenth century by Nicola da Monteforte ; the important sculptural work , the object of interesting studies , it is kept in a niche behind the high altar . Tradition has it that in memory of the miracle performed by Our Lady that exuded droplets of liquid heaven, the Virgin's face is washed every year in the month of August. Tombstones dating back to the sixteenth and seventeenth centuries are embedded in the floor of the factory sacred .